Nestled on the North Coast of Northern Ireland is a geological curiosity known as the Giants Causeway.  Jutting out into the sea, where the Atlantic meets the Irish Sea, is a set of hexagonal basalt columns that have taken eons to be formed geologically. You can also see them in the surrounding coast line most famously making what looks like a set of massive pipes that is called the Giants Organ. It’s one of the many beautiful and spectacular sites that Northern Ireland has to offer a visitor and what better way than to have a Log Cabins Northern Ireland as a place to stay when you are there? If you’d like to take a quick look at some options why not go to http://logcabinsnorthernireland.com/ and see what they have to offer.

The site is well served with a National Trust Visitor centre and several local services as well. You can walk down to the Causeway or take a bus as it is bit of a step back up. The basalt columns are an example of volcanic activity that comes when lava is forced up through the cracks in the earth as it was first forming the current continents.  As it begins to cool it cracks and forms into shapes, not necessarily hexagonal ones.

At least that is the science version. The legendary version states that Finn MacCool was a Giant and he had heard that the Scottish Giant Benandonner needed taking down a peg or two. Issuing a challenge of “giant” proportions Finn set about building a land bridge to Scotland so that he could go over and face Benandonner and settle the issue of who was the more formidable of the two. However, once he had finished the famous Causeway and went across the water much to Finn’s consternation he found that Benandonner was very much bigger than him and he ran back to Ireland.

Upon finding the Causeway Benandonner thought that it was high time he paid this upstart MacCool a visit so he came over the Causeway looking for Finn. Finn, in fear for his life, looked for somewhere to hide but it was his clever wife Oonagh who came up with a plan to save him. She dressed Finn up in baby’s clothes and bonnet and put him in in the bath and made it look like a bed in their house. When Benandonner came to look for Finn he asked Finn’s wife where he was. 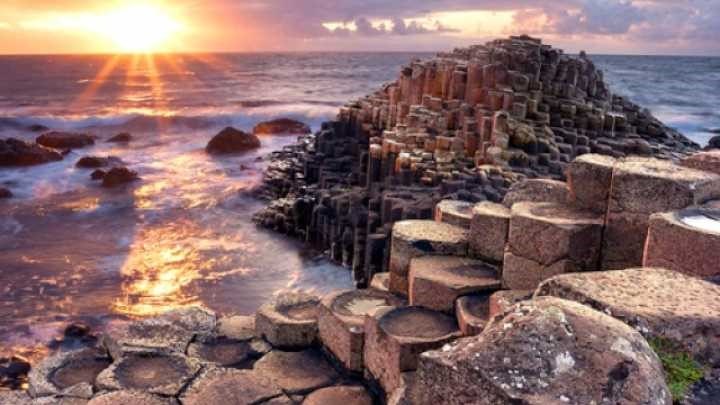 “Well now, he’s out a hunting Deer. There’s none here but me and the child his little boy”, said the wife and she showed Benandonner the “baby” Finn. Benandonner looked at the babe in the bed and thought “If this is the son of Finn MacCool how big is the Father!” and he ran from the house, back to the Causeway and ripped it up behind him so that no one could follow.

That’s much more interesting than sedimentary flow rates isn’t it?

Be the first to comment on "The natural wonder of the Giants Causeway."